Some of the nation’s best-loved celebrities have joined forces to support a Norfolk nurse’s charity fundraiser.

The eight A-list stars have thrown their weight behind the competition to find the country’s best pet pooches after hearing how retired nurse Fee Sharples (65), from Hardingham near Norwich, was raising money for life-saving research after she was diagnosed with Stage 4 breast cancer.

The former NHS worker, who finds it hard to walk long distances after the cancer spread to her pelvis, is an experienced fundraiser having previously raised over £11,000 for Cancer Research UK, £217,000 in aid of Help for Heroes and £53,000 for Veterans Norfolk.

Fee, with the support of her husband John, a retired army officer and her family, said she wanted to give something back to Cancer Research UK for the life-saving treatment she has received since her diagnosis in 2014.Now her story has been picked up by a host of celebrities, and the TV stars have come together to back Fee in search of the nation’s top dogs.

Fee said she was overwhelmed by the messages of support she has received, she added: “I thought my ‘lightbulb’ moment might generate some interest but I couldn’t have imagined in my wildest dreams that we would get so many famous people supporting us.”

The incredible celebrity line-up for Britain’s Next Top Dog 2021 will judge photographs sent in by the public on themes such as Puppy Dog, Urban Dog, Off-Road Dog, Pampered Dog, Working Dog and Playful Dog.

Details of the competition can be found here: www.britainsnexttopdog.com

Chariots of Fire actor, Nigel Havers, pledged his support and said: “Cancer Research UK means a huge amount to me personally. My second wife Polly died of Ovarian Cancer and during that time I got to know a lot about the amazing work that is being done for all forms of this disease, and what truly wonderful strides are being made by Cancer Research UK in their quest to conquer cancer once and for all. Such positive things are happening, and every day we see the progress that is being made.”

While Comedian Stephen Fry, who has a home in Norfolk, said: “I’m very happy indeed to be a judge for Britain’s TOP DOG and much looking forward to pawing through the entries raising money for Cancer Research UK.”

Fee, who qualified as a nurse in 1974 and retired just three years ago, knows first-hand just how important new breakthroughs and discoveries are to help more people like her live longer, she added: “When I was diagnosed with stage 4 cancer my daughter Sarah was getting married six months later and we all wondered if I would make the wedding. In some ways I consider myself a medical miracle because I’m still here seven years later.”

It was during a routine mammogram that Fee’s breast cancer was discovered. Her treatment has included three different types of hormone therapy and while she is now on chemotherapy she has also benefited from taking part in a Cancer Research UK-funded trial, she continued: “It’s because of research and relentless determination that I have survived. With huge support from my family, friends and an amazing oncology team, I have learnt to live with cancer.

“It’s thanks to a Cancer Research UK and, in particular a trial I underwent at Addenbrookes Hospital in Cambridge, that I’m still here today, so understandably it’s a charity close to my heart.”

Cancer Research UK expects to see its fundraising income decline by a staggering £300m over the next three years, due to the coronavirus pandemic.

But with one in two people will develop cancer at some point in their lives, the charity is determined to continue its life-saving mission.

Fee continued: “Lockdown has been so hard for us all, but particularly for the nation’s charities who have lost so much vital funding for its research projects which will benefit one in two of us in the future. Fundraising should be fun and should bring some light-hearted fun to the nation of dog lovers.”

The entry fee for the competition is £10 with ALL profits going to Cancer Research UK. The winners of the categories will form the shortlist for Britain’s Top Dog 2021 and the Top Dog will be voted for by the public using Text to Donate, with each vote costing £2.

Sports presenter, Gabby Logan, said: “I am thrilled to be a judge for Britain’s Next Top Dog. I adore dogs and can’t think of anything I would rather do than drool over dog photos, and, what’s more, it’s all for a fabulous cause. I implore you to enter your dog if you can.”

The competition starts on May 15 with the winner to be announced on June 30. The Top Dog winner will receive a top of the range smartphone with accessories, a long weekend in a dog-friendly hotel and a bespoke Emma Bridgewater trophy, while the winner of each category will receive a doggy bag of prizes including dog accessories, vouchers and a dog portrait.

Speaking about his role as a judge, Graham Norton, said: “Dogs have helped so many of us get through the last year, so the opportunity to stare at pictures of them while raising money for such a worthwhile cause was too good an opportunity to miss.” 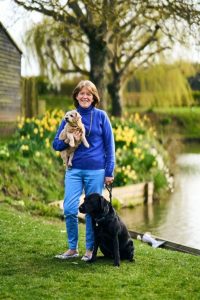 Fee, pictured with her three-year old black Labrador, Inca, and her 12-year-old Norfolk terrier, Pickle, said although there was one overall competition winner, all of the entries would still help raise money for life saving research.

She added: “The idea for Britain’s Next top Dog came to me in the middle of the night. I have always had dogs and I know just how much they mean to us all. They are far more than just pets, they are very much part of the family and are always there for us through both the good and bad times and always with their unconditional love, loyalty and daft antics – they just make you smile. I have certainly needed Inca and Pickle on my own cancer journey and it’s going to be fabulous seeing and hearing how the nation’s pet dogs have made an impact on theirs and other people’s lives.”

Apprentice star Saira Khan, added: “I yelped when I was asked to be one of the judges for Britain’s TOP Dog. I know it’s going to be hard, because I will fall in love with every dog I see. Such a wonderful way to raise money for Cancer Research UK. I’m so excited and CANINE wait to get started.”

Cancer Research UK’s work has been at the heart of the progress that has seen survival in the UK double in the last 40 years. Thanks to the generosity of its supporters, the charity currently funds around 50% of all publicly funded cancer research in the UK and is the only UK charity fighting more than 200 types of the disease.

TV presenter, Jake Humphrey, added: “Coming from a family of dog lovers, I am delighted to support this fundraiser for Cancer Research UK as a judge. I’m sure we all think that our four-legged friends are the best in the country – let’s find out who really is Britain’s Next Top Dog and support a really worthwhile cause at the same time.”

Trudy Stammer, Cancer Research UK’s Head of Fundraising, said: “This looks set to be a wonderful event, bringing together people and their four-legged friends to help beat cancer. We’re incredibly fortunate to have such loyal and creative supporters, who come up with innovative fundraising ideas to support our life-saving research –we couldn’t do what we do without them. In a world where our fundraising has slowed down, this opens up a new opportunity to bring people – and their pets –together online for such an important cause.”

Isabella von Mesterhazy, Head of marketing at Petplan, commented: “As the UK’s no.1 pet insurer, Petplan have been helping keep the nations dogs happy and healthy for over 40 years and are excited to see who will be crowned Britain’s Next Top Dog. Founded by Petplan customer Fee Sharples, we are proud to support this worthy initiative that celebrates the important role pets play in our lives and raises much needed funds for Cancer Research UK.” 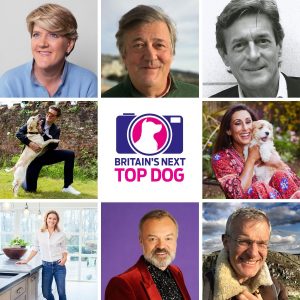